Tuned automatically with a paired VHF station (Localizer or VOR). Works by having the DME unit on the aircraft ping the ground unit. Ground unit will respond to the ping, and the airborne unit will compute & display distance to the ground unit using time-of-flight.

Operates in the LF to MF range (190-535 kHz). As the name describes, this does not give you the direction to the beacon. Has the following service volumes:

A type of NDB installed at the outer or middle markers (sometimes both) on some ILS approaches. Low-powered, at least 25 watts & 15 NM range.

As the name describes, they’re in the VHF range (108 to 117.95 MHz). These are beacons that include a directional signal, so that a receiver can figure out what radial they’re on and display how far off the radial (up to 10° for most HSIs) the aircraft is.

The VOR MON (minimum operational network) program ensures that as old VORs are decommissioned, a MON airport (equipped with legacy ILS or VOR approach) is available within 100 NM regardless of aircraft position in the continental US.

Service volume depends on the VOR. For all VOR types, from 0 ft AGL up to 1000 ft AGL, it looks like a cone, extending out to the volume specified at 1,000 ft. 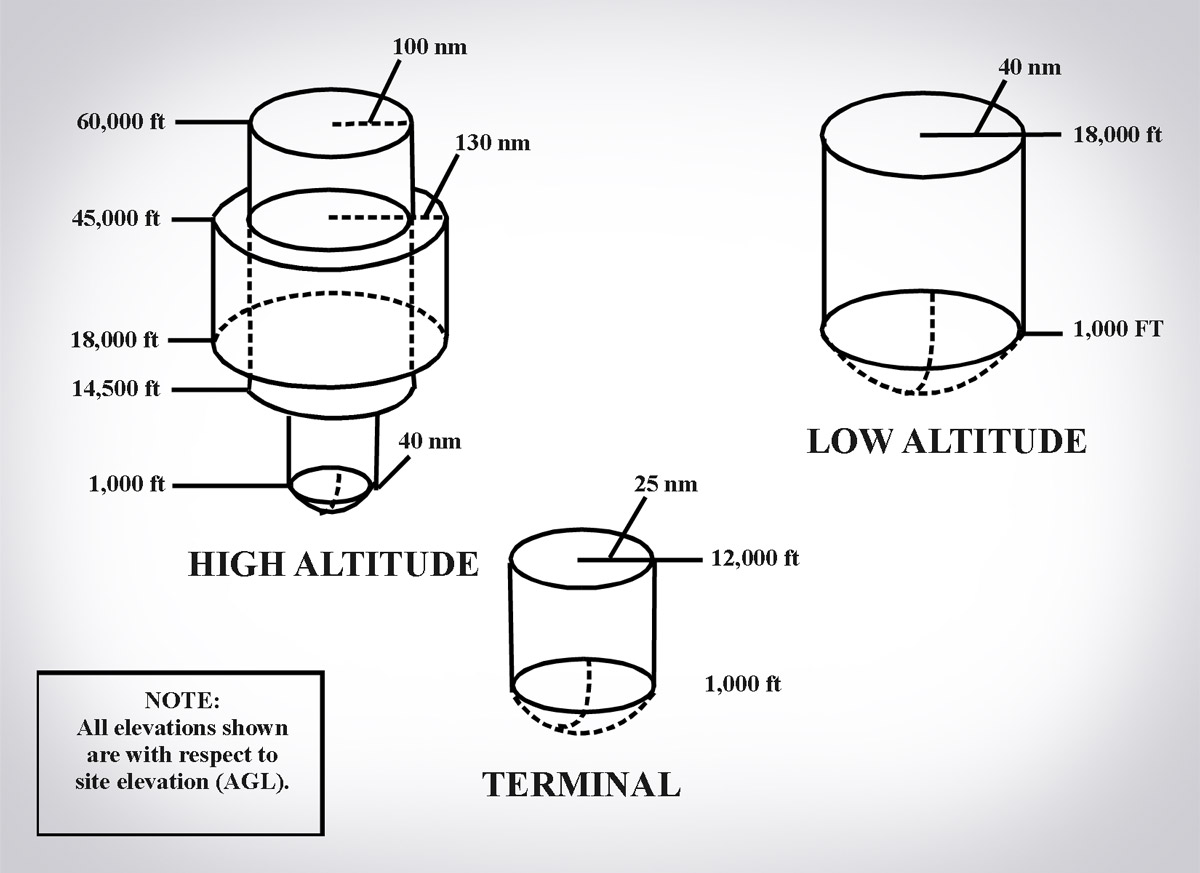 Most of the time, in the US, you’ll be using GPS-based RNAV.

In an approach, you can also get RNAV VNAV, which provides Vertical NAVigation guidance (using GPS?), and BARO-VNAV, which uses barometric altitude to provide vertical guidance.

Note that, per AIM 1-2-3 (c), you can use an RNAV system instead of ground-based navigation for the following instances:

RNAV with navigation monitoring and alerting. It also is “a statement of navigation equipment and service performance”.

The first GNSS (Global Navigation Satellite System). Created by the US. Minimum 24 satellites (currently a lot more), all at a half-synchronous orbit (2 orbits/day) of 10,900 NM. At least 5 are in view from at any given location on Earth.

Wikipedia has a good article on how GPS actually works.

Fault detection and elimination is known as RAIM (Receiver Autonomous Integrity Monitoring). You can also use an altimeter to substitute a satellite input, so that you can detect a fault with only 4 satellites, and eliminate it with 5.

GPS CDI deflection shows horizontal distance from the centerline, contrast with a VOR CDI, which shows the amount of degrees off course you are.

GPS can substitute ADF (Automatic Direction Finder) and DME, except for ADF substitution on NDB approaches without a GPS overlay (“or GPS” in title).

Check GPS NOTAMs before flight, and use RAIM prediction if available.

GPS Augmentation Systems, or Differential GPS (DGPS) is a system that improves GPS accuracy by measuring errors received by reference stations at known locations and then broadcasting those errors to supported GPS receivers. There are a few things here for that:

WAAS (Wide Area Augmentation System) is the US system, EGNOS is the equivalent in Europe.

Ground stations (Wide-area Reference Stations and Wide-area Master Stations) measure GPS errors and produce correction signals. “These corrections are broadcasted back to the satellite segment from which they are bounced back to aircraft GPS WAAS receivers to improve accuracy, integrity and availability monitoring for GPS navigation.” This covers a wide area.